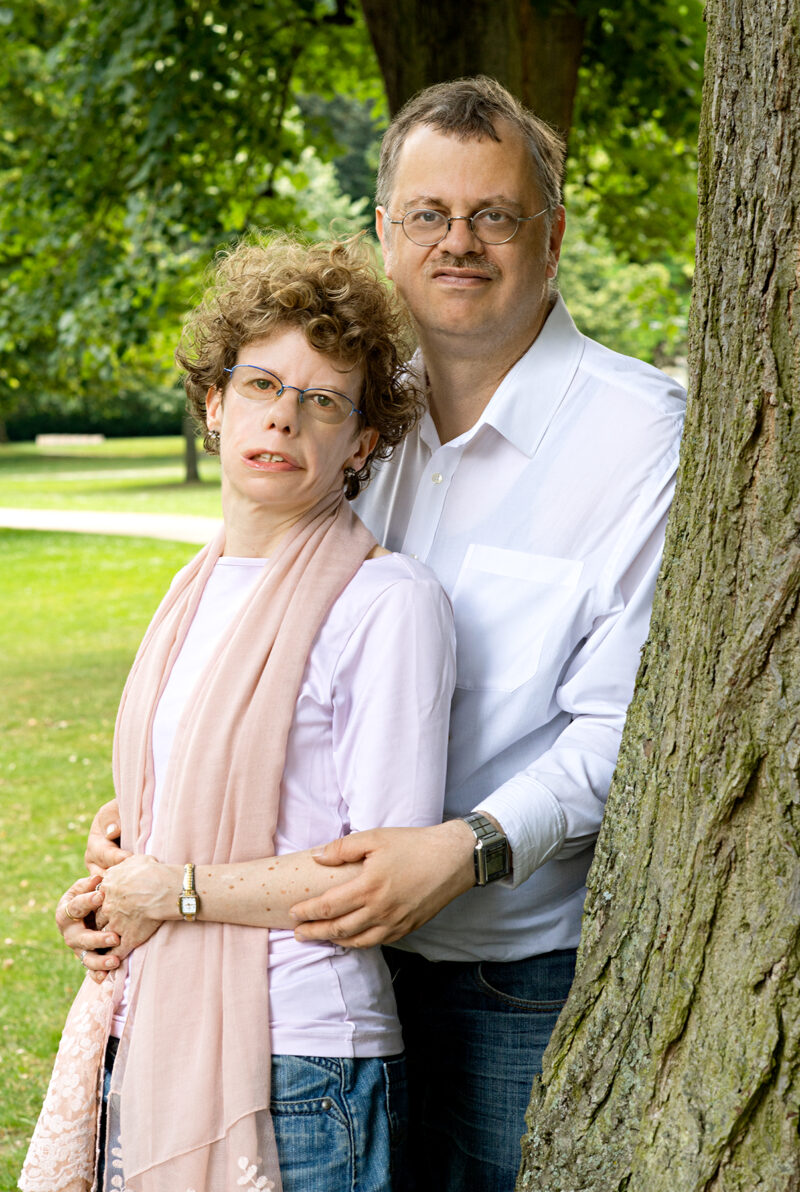 “Not quite a fashion model”

I wouldn’t stress my middle name so much, but I’ve discovered I have an Australian namesake who is a fashion model. Maybe one day I can still go into mature modelling, for people with a facial difference, but that’s a whole different story…

Anyway, I am 48 and was born with Moebius Syndrome. Moebius Syndrome is essentially a facial paralysis stemming from impaired development of the cranial nerve 7, combined with inability to move the eye or eyes away from the nose (impairment of cranial nerve 6). I was born in Germany, but my English parents moved to Dublin, Ireland, 4 months later. It was only when I was 2 years old that they received the diagnosis there.

I will leave it for others to describe the many challenges that children with Moebius are faced with, ranging from the inability to feed like other babies (because they cannot suck), to being considered mentally deficient simply from their lack of facial expression. What I would like to address here is the issue of self-acceptance, self-esteem, and finding love with a life partner when you have a visible difference of any kind, but especially if it is a facial difference.

Thanks to the attitude fostered by my parents at home, I have always considered myself fairly lucky. As a child and a younger adult, I felt lucky that I was able to do so many things, including finishing school in Germany and going to study Japanese at Oxford university in England. This experience allowed me to travel and broaden my horizons. I also happened to go to Somerville college, then an all-women’s college. It was there especially that I adopted the belief that, as a woman, I could live a completely independent life and not be dependent on any man for my livelihood.

From time to time however, I would secretly wonder if one day, I might eventually meet a man who might accept me and be able to love me. I certainly had my fair share of infatuations with men, but had no idea at all how to get any further. Unfortunately, people around me tended to say things such as “Be grateful that you’re single”, or “Just be patient, the right man will show up one day.” For many years, I had this belief that love “just happens” and you should not actively do anything to “make it happen.” Also, because of my other belief that it was kind of “beneath me” to want companionship, I felt unable to talk about this to anyone. At that stage, I had also never met anyone with Moebius Syndrome (or indeed with any other facial difference), so yet another unhelpful belief lurked at the back of my mind: perhaps I should best forget about that side of life completely. After all, I was only too aware of what people would say regularly within earshot; “ugly”, “monster”, “hey, it’s your girlfriend again” are just some of the many examples. While I had plenty of female friends, I supposed I was just “too much” for a man to cope with.

My first kiss at 41, and finding wonderful (romantic) companionship!

It was only when I was in my late 30’s that a new Japanese friend and colleague asked me, very directly, why I was alone. When I just replied that it was because of my face, we started to have a very lively discussion, fuelled, I may add, by a bottle of classy white wine! The short story to this is that she encouraged me to start dating, not without a fair bit of resistance on my side. In the beginning, I was still convinced that any efforts in this direction on my side would just be futile.

But she really helped me to confront the issue head-on and go after my dream of finding love. Some years later, I met a man in a cosy bar in Cork, Ireland, who (some months later, on our second meeting) gave me my first kiss at 41! No-one ever forgets their first kiss. I remember standing there, shocked to the core, thinking, “Did he really just do what I think he did?” before I realised this actually might be pretty good!

After that relationship ended some months later, I decided to get more intentional. Thanks to intensive coaching, and after many rejections, I met my partner only a few months later (now 5 ½ years ago) on the internet. It may not seem like it, but it was actually pretty romantic! Towards the end of our first meeting, Armin (who’s German) started singing “Some Enchanted Evening” from the 1940’s musical South Pacific, which I happen to know pretty well. The rest, as they say, is history…

Helping others to develop greater self esteem – and find love, with their visible difference

I’ve been working as an environmental/sustainability specialist in the Japanese electronics industry for over 20 years now, but nowadays, I am increasingly spending my working time helping others to foster greater self-acceptance for their facial or other (visible) difference. I only found the German Moebius Syndrome Association in 2013 (7 years ago), but by now I am an active member there. Thanks to my experience as an employee representative, I experienced first-hand the value of coaching. In 2015 I completed my formal coaching training, and now support people in the areas of confidence, mindset and love coaching, all absolutely vital for increased self-esteem and ultimately, success in so many areas of life and work and business. In fact, today I firmly believe that anyone, whether with a facial difference or not, should first feel comfortable in their own life before searching for love. In real life, it doesn’t always happen that way, of course. But looking for love from a place of self-acceptance and confidence helps you to focus on people who are really on your wavelength, and helps you to avoid the trap of “settling” for somebody who doesn’t quite meet your standards, for example in the way he (or she) treats and respects you.

The difficulty of photos in dating

I have started relationships both offline and online – there are certainly advantages to both ways, although of course online dating needs to come “offline” at some stage to make the relationship a “real” three-dimensional one. When it comes to online dating, one very great disadvantage which I see nowadays is the emphasis placed on profile photos. Nowadays, it is so easy to post or upload your photo, that it seems to be taken for granted to show your photo straight away. One of my training mentors, a German dating specialist without any kind of outward difference, saw this difficulty too. Too often, people can be attracted to somebody purely for their looks, only to end up being disappointed later. Conversely, people with depth, character and real personality can sometimes be overlooked if their face doesn’t “fit”. Key to success in online dating is finding ways of letting your personality stand out, and getting it to speak louder to the right person than your photo.

I am a strong supporter of equal rights and awareness-raising on behalf of people with visible differences. In fact, we with facial or other visible differences and our supporters can also offer another lesson for the population at large, besides demonstrating that we have many talents, and are anything but monsters. So many people, even without a visible difference suffer from low self esteem, for a huge variety of reasons, usually rooted in our past or in the environment which we currently find ourselves in. By daring to go out in the world and showing ourselves in all walks of life, we can help to inspire those around us to let go of their insecurities and aim for more in life.

However, while I do strongly believe in challenging the beliefs held in society (such as portrayal of characters on screen), I do not support placing the blame with society and leaving responsibility there. Only the other day, I received a message from a person with Moebius Syndrome who said that there was nothing more he could do, “he was doing everything right” in dating, but the only way he would find a partner would be if society would change its attitude towards disability and visible difference. While I can fully empathise with this feeling (I have been there myself), I know that we too, as those with a facial difference, can and should not feel afraid to go after our goals and dreams, and should ultimately realise that we are only victims if we decide to see ourselves that way. By going out in the world and showing all the personality and talent that we too have to offer, we can also do our own bit to change the way society sees us – not as victims, but as people with just as much a right to live life to the best of our capabilities as others. Thanks to the excellent work of FEI, our supporters, and so many individuals in this worldwide community, I believe we really are making tangible progress in this direction.