Creating a world where everyone is treated fairly whatever their face looks like.

Face Equality International is an alliance of Non-Governmental Organisations (NGOs), charities and support groups which are working at national, regional or international levels to promote the campaign for ‘face equality’. 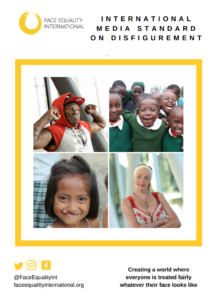 The FEI Alliance has developed the International Media Standard on Disfigurement with a view to supporting and advising on best practice by written and broadcast media professionals when covering disfigurement in the media.

The Standard offers guidance on language, interviewing, showing respect and reducing the stigma around disfigurement. The Standard has been developed in order to empower media professionals to reshape the way disfigurement and facial difference is described and represented in the public eye, with the goal of moving towards honest, informed and respectful media coverage.

Face Equality International and its member NGOs wish to work collaboratively with journalists, researchers and media professionals to support them in getting it right, rather than calling them out when they get it wrong.

How we developed the Standard

The Standard was developed through rigorous consultation with FEI’s 33 NGO or charity members across the worldwide alliance. Individual members user-tested each stage of the Standard within their own organisations, to ensure the Standard’s overarching principles were appropriate and made sense within each country and language, with cultural differences being considered throughout.

In order to incorporate the cultural variances that came to light throughout the consultation, the next stage will be for country- and/or regional-specific working groups to develop more detailed Guidelines that reflect the Standard’s principles.