Today marks the final day of COP26 – the United Nations Climate Change Conference. The conference has starkly highlighted the inaccessibility of government events, when disabled world leaders weren’t able to attend. But it has also served to further highlight how marginalised communities will continue to be disproportionately affected by the climate crisis.

As per the GLAD Network Advocacy Paper on Disability Inclusive Climate Action, “the consequences of climate change are especially severe for members of the disability community that experience intersecting forms of discrimination, including women, children, Indigenous peoples, older persons, displaced populations and other marginalized groups; for those experiencing poverty…”

I recently discovered a term that describes the issue at hand, ‘eco-ableism’. This term refers to “a failure by non-disabled environmental activists to recognize that many of the climate actions they’re promoting make life difficult for disabled people.”

The facial difference community may or may not identify as disabled, or with the term ‘ableism’ but there are key parallels to highlight.

To provide some examples of how our community might be affected, many people with facial differences also have visual or hearing impairments. There have been recent cases where public safety announcements in relation to natural disasters have not reached these communities, such as the New Orleans hurricane.

Living with a disfigurement can often come with isolation, either from shielding, recovering from treatment, or perhaps in response to the constant discrimination experienced in day to day life. There are worldwide communities where stigma is so severe that people are quite literally hidden away.

This again runs the risk of emergency warnings for climate-related disasters such as fires and floods, potentially not reaching the community. Not to mention the inaccessibility of evacuation measures. A lack of faith in authorities, resignation, or perhaps simply being overwhelmed with day to day life living in a face-ist world may mean that the facial difference community is simply less engaged in the climate conversation. But, I can’t help but feel that we can’t afford to hand over any more power to those in positions to exclude this already marginalised group.

We must influence the development of the emergency measures that we’ll inevitably experience as our planet rapidly deteriorates. Influencing such measures so that the facial difference community, based in areas most impacted by the climate crisis, can access these resources is vital. Speaking up, and reclaiming power so that the facial difference community is not excluded from the fight to save our planet is essential.

What is Climate Justice?

I was struck by an incredible talk recently by Miatta Fahnbulleh, CEO of New Economics Foundation at the ACEVO (Association of Chief Executives of Voluntary Organisations). A session titled ‘Building a wellbeing economy’, which explored economic success that was not measured on economic growth, but quality of life. In the session, delegates spoke of the importance of social justice aligning with efforts to counteract climate change  – highlighting the risk if these movements were to distance themselves from each other, one being the potential to end up competing for the same limited resources.

Remaining aligned is essentially what has been coined as climate justice. ‘Climate Justice’ was explained by former President of Ireland, Mary Robinson at a United Nations assembly as a “shift from a discourse on greenhouse gases and melting ice caps into a civil rights movement with the people and communities most vulnerable to climate impacts at its heart.”

Truth be told, I had a lightbulb moment whilst listening in to Miatta’s talk. I saw my professional and my personal relationships with the planet as entirely separate. I figured going vegan as an individual was a personal choice rather than one that could transfer over into work. And as though there wasn’t a great deal that could be done beyond going paperless, plastic-less, or reducing our carbon emissions as a charity. So despite being passionate about the planet, and making conscious decisions to try and protect it day to day, I hadn’t really made the connection with how this aligns not just with our decisions as a charity, as a membership organisation, but with the face equality movement at large.

This is not just a climate crisis, but a human rights crisis. I know how overwhelming it is. I am constantly overwhelmed by the state of our world. From the face equality perspective, there is so much to be done to fight against injustice, and this is yet another area where the voices of people with disfigurements need to be heard. This is a community that can’t be sidelined and neglected once again. We cannot achieve face equality without a planet for people with facial disfigurements to exist upon.

Speaking up, and reclaiming power so that the facial difference community is not excluded from the fight to save our planet is essential. 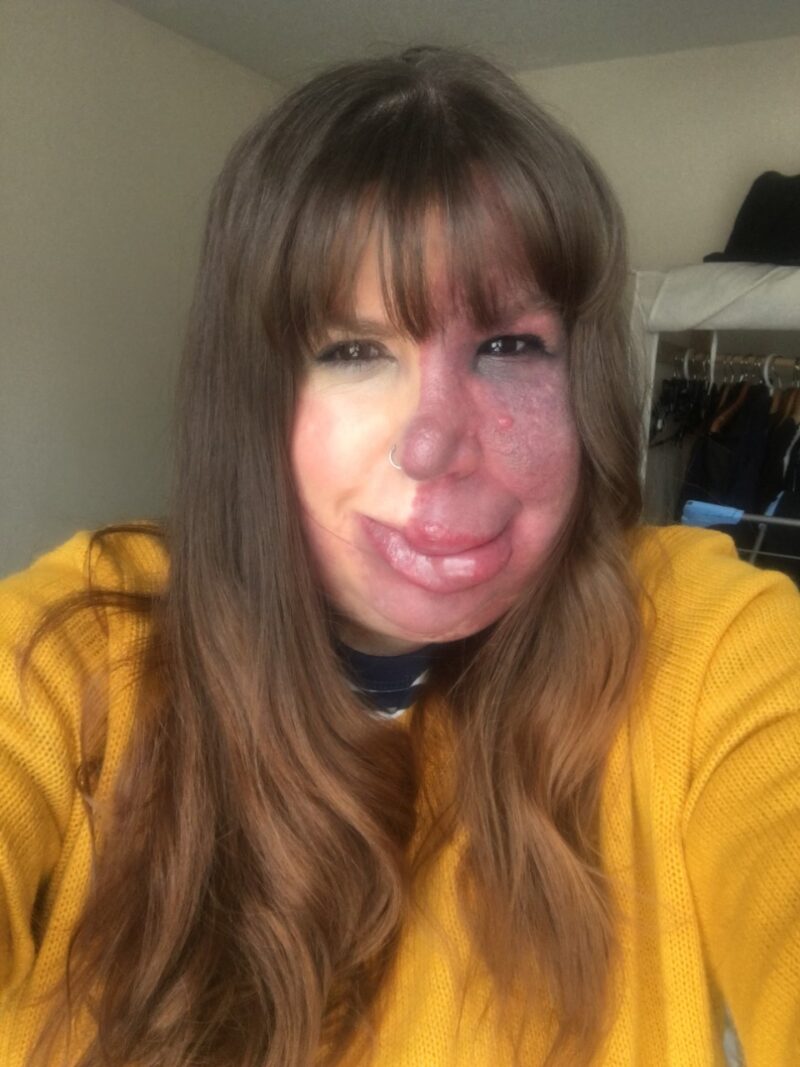 Why Halloween is my hell

When I was growing up, so often at Halloween, bullies would point at me, ‘oh look at her face, got her Halloween mask on already’. It’s degrading to have someone tell you that you look like a monster.

Why is Halloween difficult for the facial difference community?

When Halloween comes around, it is a very visible reminder that people think our differences make us scary.