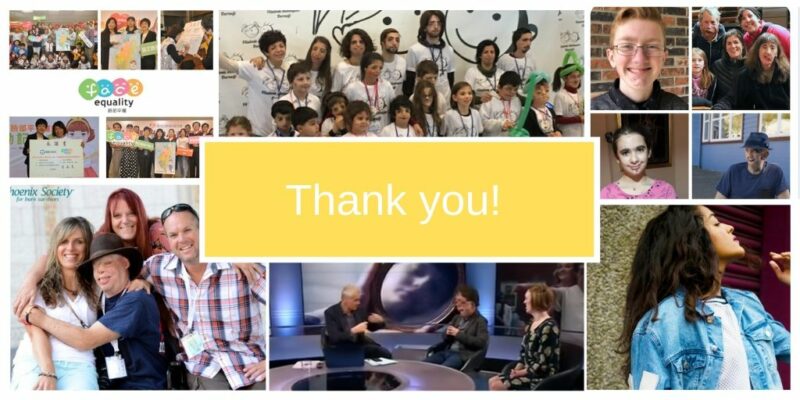 The first Week of many…

People with unusual-looking faces have been all over the media and social media in the last week! Whether on, Turkish, Canadian or Taiwan TV or Channel 5 or BBC World TV or in local media (as in Grand Rapids, Missouri), it has been so refreshing to see their faces and hear their challenging stories. The first International Face Equality Week was meant to do just that — open eyes and challenge minds!

Many of the stories were sobering with people of all ages telling how their lives had been disadvantaged by being treated unfairly, bullied in school, prevented from getting good jobs or abused in public or on social media.

But set against those were an equal number of much more upbeat features marking how changes are being brought about in some countries: in Taiwan, cities have committed to removing photographs from online recruitment processes and in Britain, the Advertising Standards Authority issues guidance on ‘visual difference in ads’. Although small in themselves, those are important developments showing how we can use future weeks to showcase the injustices and get influential bodies to announce meaningful changes.

And it wasn’t just in the media and online that International Face Equality Week was marked. Events were held in major cities like Toronto and London, in specialist hospitals like the one in Nepal and in the streets and parks of Prague!

So, although the dust has yet to settle and all the statistics are still being added up, we can say that having been dreamt up less than six months ago, the first International Face Equality Week has been a success. And not least it has been a very strong bonding experience for the thirty NGOs that are now involved in the Face Equality International alliance: “it’s been so great to collaborate with you” is a message I’ve heard a lot.

And that, ultimately, is what is so important for me. I know that transforming the attitudes and behaviours towards people with facial differences and disfigurements of the general public and institutions in business, the media and government will take at least a generation. It will only happen with concerted effort too — and that’s where enlightened NGOs come in because working together, we can achieve so much more than on our own.

One of the reasons for this is that facial ‘difference’ happens for such a wide variety of reasons — from cleft lip and/or palate and other congenital conditions like Moebius or Treacher Collins Syndromes, from birthmarks and haemangiomas, from burns after fires, warfare or acid violence, from scarring in accidents or treatments for facial cancer, from facial paralysis after stroke or Bell’s palsy, from skin conditions such as acne, alopecia, psoriasis and vitiligo… and there are many more.

For very good reason, charities and support groups have been established to support children and people with specific conditions with different needs for medical, surgical and support — and they do very important work.

But, although their medical needs differ, every single of their members or clients is exposed to exactly the psychological and social challenge of living in a look-perfect society. They are liable to the sense of being left-out, isolated, bullied, ridiculed and stared at, vulnerable to low expectations in school, problems getting work and harassment in the workplace, abuse on social media and stereotyping in the media and films. Just because of the way they look. It’s not just at all. It’s unfair and it will never change unless those charities come together — and that’s the rationale for Face Equality International.

Someone asked me during the Week how many people could benefit from the Week… and I said ‘millions’… and I’m right.

In April 2019, there were an estimated 7.7 billion people living on this planet. If the estimate made in the UK that one in 111 people with the population has a facial difference that is psychologically and socially significant, that means something like 70m people across the world need to have the confidence that the societies they live in respect face equality. They should be accorded full human rights and treated fairly and equally whatever their face looks like.

So, I offer a huge ‘thank you’ to all the NGOs, advocates and supporters who’ve made the week happen — I’ve been excited and humbled by so much effective campaigning. But I know it’s going to take many more Weeks in future years to bring about face equality. Onwards!