Dr James Partridge OBE passes away, leaving behind a legacy of life-changing work and devotion to others, as the pioneer behind the face equality movement 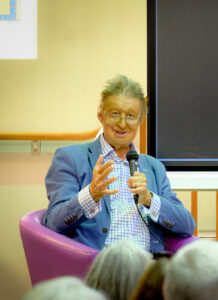 He was a wonderful and devoted husband to Carrie, father to Simon, Charlotte and Harriet, brother to Alison, Clare and David and ‘grand-dog’ to Callum, Imogen, Juliet, Zoe, Leo and Zadie.

In 1992, after writing his first memoir which reflects upon the lessons learnt after sustaining life changing burns, aged 18, James then founded the Charity ‘Changing Faces’, which took its name from ‘the book he wished he could have had to help him through his own recovery’.

James was determined that the insights he’d gained during his prolonged adjustment to facial disfigurement should be put to positive use, and there is no doubt that his legacy will live on through the countless lives he has so positively impacted, and the well respected NGOs he has founded.

To this day, Changing Faces is the UK’s leading charity supporting people with disfigurements. Founded by James in 1992, the charity provides specialist psycho-social support for individuals and their families. This was the first tailored support of its nature to be recognised in UK healthcare. The charity also led the way in campaigning for the fair and equal treatment of all, irrespective of appearance; which is now recognised as face equality. With acclaimed national campaigns and advocacy within education, employment, healthcare, policy and across the public eye, James was instrumental to seeing disfigurement recognised as an equality issue.

A fond and defining moment for James was the success of a campaign which saw posters of people with distinctive appearances appearing across the London underground. Which no doubt laid the foundations for the move towards broader representation of differences in contemporary advertising, which before then, was unheard of.

His ground-breaking work and unwavering commitment to improving the lives of others will no doubt continue on through the countless friends and allies he has made. In 2017, James stepped down from Changing Faces to found Face Equality International; an international alliance of NGOs working with people with disfigurements; united by the purpose of securing solidarity and global attention for the campaign for face equality.

This year, James released his second book, ‘FACE IT’, which is a memoir, a manual and a manifesto for change. The motivation behind which being to tackle the causes of ‘face-ism’. The book dissects facial prejudices, the discrimination people so often face, and lays out the changes that need to happen on a global scale to bring about face equality.

It is with the gift of this book, and the legacy of what James’ work has left behind, that we can look towards a future where face equality will become a reality. Without a doubt, his influence in the development of equality, human rights and inclusion will live on. Not least the countless lives he has positively impacted by fearlessly and tirelessly standing up for a world free from prejudice and exclusion, and providing the support people need to live their lives to the fullest; as James himself did with such enthusiasm.

A mentor, a friend, and an inspiration to so many people, he brought immense positivity and laughter with him wherever he went. He will be tremendously missed and forever present in the lives of so many.